Interview with the Author: Working in Class: Recognizing How Social Class Shapes Our Academic Work 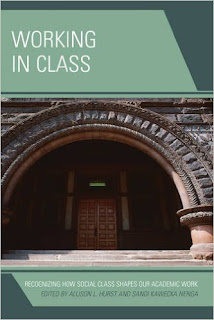 
What is the main argument in this book?
Working in Class is an interdisciplinary edited volume of essays by cutting-edge scholars of social class.  We asked the authors to use their scholarly expertise to make sense of one aspect of their work in the academy—either scholarship, teaching or academic working conditions.  The overarching argument that connects all 13 essays is that social class shapes every aspect of colleges and universities today, and that we can draw upon our scholarly expertise to identify, resist and disrupt the subtle mechanisms reproducing social class inequalities in the academy.
What motivated your work?
I like to think of Working in Class as the intellectual grandchild of Ryan and Sackrey’s (1984) edited volume, Strangers in Paradise.  Ryan and Sackrey’s collection of autobiographical essays written by working-class academics made the workings of social class in the academy visible.  A handful of other autobiographical collections followed, including Tokarczyk and Fay’s 1993 Working-Class Women in the Academy:  Laborers in the Knowledge Factory, and Dews and Law’s 1995 This Fine Place So Far From Home:  Voices of Academics from the Working Class. The autobiographical essay was an incredibly important and useful way for scholars to generate analytical insights about social class, especially in academic disciplines with a paucity of research on social class.  By 2013, when Allison Hurst and I started this project, there were a growing number of  scholars using conventional methods to investigate social class and it seemed as if we could go beyond using only autobiography as a way to generate new insights about social class in the academy.  We asked the contributors to Working in Class to place their individual class biographies, their autobiographical experiences of working in higher education, and the research literature on social class into conversation.
What theory or theorists inform your method and methodology?
Many of the contributors in Working in Class draw upon Pierre Bourdieu’s theorizing about the habitus and cultural capital.  The fact that so many of our contributors draw upon Bourdieu is, I think, a testament to how powerfully his ideas reveal the mechanisms by which social class is reproduced.  I would also argue that the goal of our project—to place the individual’s experiences in the academy within a broader context—pays homage both to C. Wright Mills’ idea of the sociological imagination and the feminist idea that “the personal is political.”

How might the book be used or how has it been used in a classroom?

Working in Class could be used by professors who want to add social class to discussions of diversity and try to highlight the ways that people from different class backgrounds might experience the shared space of the university in different ways.  Essays from Working in Class could also be used as exemplars of how to apply Bourdieuian theory.  Finally, professors who want to encourage their students to try blending autobiographical writing with a literature review and/or analytical writing might find the essays in Working in Class to be useful examples of interdisciplinary writing.

How do you think students would most benefit from your book?

I write in the book that “…as so often happens, messages about social class are buried in the substrata of a conversation.  Statements about social class seem to erupt from the ground up in vague, emotionally encrypted statements…”  Social class dynamics are often difficult to identify because we rarely link the word “social class” to  miscommunications, microaggressions, and institutionalized systems of privilege and oppression.  Reading Working in Class can help students to recognize, name and hopefully resist the reproduction of social class inequalities.

Many thanks for sitting down with Practicum for this interview!