What’s in a name, a name rearranged? Part 1 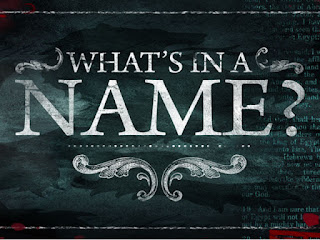 By Stacie A. Swain

Recently I wrote a response to an editorial in Critical Research on Religion (CRR).The editorial debates a ‘critical religion’ versus a ‘critical theory of religion’ approach. An earlier piece briefly mentioned in the editorial (and in my post) asks, “Can a religious approach be critical?” and the answer from the CRR editorial board, in short, is “yes.” I’d like to muse on these thoughts a little more by pointing out that we now have three word combinations to consider when we think of what a ‘critical’ approach may entail with respect to ‘religion’:

What distinguishes the first from the latter two is the contention that, as Willi Braun states, “religion does not exist; all that exists for our study are people who do things that we [or they] classify as “religious.”[i] In contrast, the latter two take for granted that there is something identifiable called ‘religion’ and that one can have the quality of being ‘religious.’ Here we have two claims (similarly named, but rearranged), presuming that #3 above is subsumed within #2. The two claims in question regard:

The pedagogical implications of the two approaches in question can be elucidated by considering not only such wordplay, but also the aims that they claim to work towards and how they do so. The aims of CRR state that, “our goal is not to be pro-religion or anti-religion but to understand religions in both their positive and negative manifestations.”[ii] The authors of the editorial, “suggest a more social scientific construction of the category of religion… It need not have one agreed upon universal definition, since we think such a definition is impossible, but may contain multiple definitions (after all, words have more than one meaning) derived from some common characteristics of the world’s religions.”[iii]
When thinking about teaching this approach, it would entail defining the “category of religion” according to “the world’s religions” (i.e. defining religion by referring to religions).This is, to borrow a nice turn of phrase from Tomoko Masuzawa, “intricately intrareferential.”[iv] If one invokes ‘religion’ enough then it will (seem to) appear, much like the phantasm of ‘Bloody Mary’might as one stares into the bathroom mirror; then, you study what has been invoked as if ‘it’ has always been there, and even though you’re alone in the room, as if you had nothing to do with placing ‘it’ there and naming ‘it.’ From this I gather that a critical theory of religion entails a critical approach to something given to be already and always existing, origins mystified in the processes of construction.
The editorial in question particularly critiques critical religion as having a solely deconstructive approach. To reiterate a quote that appeared in my last post: “scholarship only becomes critical when it uses values to critique sets of social actors and their particular interests… the critique needs to have a goal. It must not only deconstruct but it must construct something better beyond it.”[v]A critical theory of religion then, can perhaps be described as constructive criticism – this approach claims to construct something called religion in a ‘better’ way, using criticism to build upwards upon a foundational concept called ‘religion.’ For if it is a “positive manifestation” then it is to be praised, and if it is a “negative manifestation,” then it is to be improved. This is done according to the “values” quoted above.
The above requires the admission that what has been constructed and classified (or classified and constructed) as ‘religion,’ has been constructed badly in the first place and continues to be. This is where the question of “values” and a progressive narrative comes in – one must have a pre-established notion of ‘good religion’ and ‘bad religion’ if one is to reconstruct it. But good or bad according to whom and in what context? In a pedagogy of a critical theory of religion, does one teach values to students, values beyond those of responsible and rigorous scholarship? Is there a line separating pedagogy from personal and/or institutional ideologies? If not, is there some mechanism in place to ensure full disclosure of that ideology and the potential interests it may serve, or serve to disguise?
In contrast and speaking generally, a critical religion approach is critical of the category of religion and those forms of scholarship that uncritically perpetuate narratives of the good, the bad, and the ugly ‘religion.’[vi]A deconstructive pedagogy might include examining the productive power of these (loaded) narratives in order to draw attention to construction, context, aims, and social implications. In the Twitterverse, it appears that undergraduate students in Alabama are doing just this with respect to ideology and the media. One student concludes a report on the exclusionary politics of news media: “Recognizing how a narrative is being built is an important facet of learning to deconstruct. Through deconstruction, we take nothing on face value, and contemplate why and how things are being represented.”
Thus, what are the implications of the way that CRR represents a critical theory of religion? What are some other representation of a ‘critical’ approach? For example, there’s Matt Sheedy’s recent take over at the Bulletin: “The critical scholar does not merely cast judgments based on an affective and political aversion to the group or practice in question, but attempts to make what seems strange familiar and poses questions rather than providing concrete answers or value judgments.” I would add that the ‘familiar’ be made strange, as well.